grey jay by any other name

Grey colour predominates
as tamarack needles
paint the earth gold and fade.
November turns the sun away from this hemisphere.
The further north, the greater that denial is.

If I ever entertain doubts about having relocated
to the north country, thoughts vanish with the return of
Wisakedejak, the whisky jack
Canada Jay, the camp robber,
Perisoreus canadensis, the grey jay

As the sun dips, jays leave their green forest boreal home.
Wisakedejak and her lifelong mate cache food each day
in the clips of spruce bark. Skillful and smart, ghostly and gifted,
they sweep out from the treetops,
to engage humans like no other species.

Landing on your hand,
taking the bread from a hatbrim,
or pausing to look you deep in the eye,
there can be little doubt of why you chose this place,
or why it chooses you.


By Jeffrey Riordan Hinich © 2010
posted by Jeffrey via Leslie
Posted by leslie anne at 18:48 1 comment: 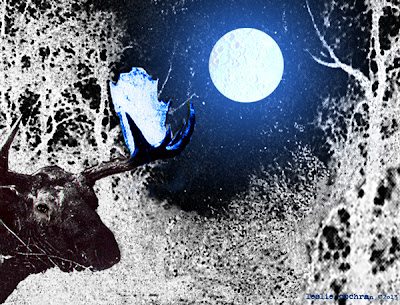 
Saturday night just past, full moon it was, two in the morning, returning to Wabos after a night of revelry in the Soo. The music still in our ears, in fast retreat from the 60s, dylanesque nuance, bending harmonicas, throwing down the cards—mixing up the medicines.


The moon shadows through the pointed trees, conversation at last slowing us down in the final snow-packed mile or so. Reflecting on the clustered barflies, curious interludes and lilting musical crescendos we had witnessed.


The vw would climb a last hill before settling into our valley—then suddenly a skidding, braking, sliding, and rude interruption of four moose, stationary on the otherwise lonely road. Caught unaware, in mid-conversation, as we were—each reacting to the others displacement. Just missing the cow moose to our right, then slide-braking in front of two bulls, their antlers as wide as das auto, their 8 legs towering over us. The four of them dramatically assembled, then individually exited stage-road left. Only the calf lingered, looking back in half-expectation of us explaining our intent. We visually returned this half-request through an open window, as this last remaining moose slipped out of the moonlight and into the bush.


So what of those lost conversations? Of music just snorted or ungulates in deep meditation? As a flood-lit moon washed over the participants, browsing a sweetness in road salt, moose elders began speculating on the heavy snows yet to come, the moose-yards yet to be discovered, or the joys of annual rut. Either way we read it, the “what if” possibilities prepared us all, slowing time for the encounter, thus preventing 6 mammals & one vw from obliteration.


Mysticism is loose in Wabos, as is the lucky moment that lets us live so see it again.

It's not so far fetching as it might seem, big blue baleen and the mighty pine.
One spouting in the brine, the other sprouting towards the sun.
Divergent species sharing a similar fate.

Leviathan. The very name itself rises from the depth of our shared language, to sample the vapors. Blue whales, the unknown “sulfur bottoms”of Melville's book, are perhaps the largest living creatures ever to travel this earth. Diving for hours, living for a century, and reaching a length improbable, a width gargantuan. From the crow's nest, Ishmael cries out “there she blows!”, betraying an awe that transcends his time and circumstance.

Strobus. A name first given to describe the unlikely bundle of five soft needles. White pine, by far the thickest and tallest vegetable in eastern North America, questing for the light. An super canopy platform, living four hundred years, gathering a height of 150 feet and a circumference of twelve. Pine captures our attention, as we look 3 times to see the top and then to a point beyond our perception. We tromp the woods on the lookout for a stick nest. “Timber!”, perfect for eagle or osprey, raven or broad wing.

The fibre and blubber was easy plucking for the plunder. It was a massacre unexamined, a genetic and geographic separation, inevitable. Masts of pine were required for the sailing ships, lights of oil for the towns. And so the shouts went out: “Lower the boats/repair the sleighs/sharpen the harpoon and the crosscut/haul on the bowline/there's daylight in the swamp”. And no one paused, or it was not recorded amidst the pining and the wailing.

Hiking among the last remaining old growth we hug and release the giant stems. We bury the treasure in our arms.
Tacking among the whales, the tourist boats tilt, our penchant for the photo trophy remains.
We need some reassurance that the ocean itself has not drowned.

By Jeffrey Riordan Hinich
posted by Jeffrey via Leslie 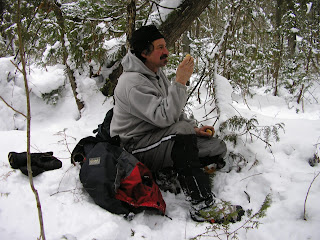 Snowshoeing again, this time into the Wabos North Wilderness area with Seamus, Ted, Josh and Jeramiah. I should the say the ages of J & J add up to about 17, whereas Ted, Seamus and I together are a hundred and something. But we are all but mere infants compared to a particular white pine we are seeking. Its rings tally over two hundred and fifty years. We are therefore searching for the shade of an elder, one whose life began long before there was a political entity known as Canada.

Alongside Station Road, we strap on the snowshoes for the steady climb to the north. Just as we begin, a lone coyote crosses our path. Everyone catches sight of it, then coyote suddenly stops to look back at us. There is a mutual recognition and it's gone. It is a reoccurring theme. A lynx or a wolf or a moose will cross your path quickly, then pause at the edge of sight for a brief moment. It may be a curiosity between species or an imperative of cross purposes. Either way, we are enriched by the encounter, as we climb to the highest lookout afforded us.

To the south, we can see the downhill runs of Searchmont where we all were yesterday. Because of this shared February holiday, the mountain is fully occupied today. Seamus' binoculars betray that the dozens of dots we see are really snowboarders and skiers, shredding the gnar.
Below us and to the east are the Sky Bear Chalets and the backdrop of Wolf Mountain. I can barely discern the snowy roadway that connects the two. I adjust my sunglasses to take in the nearby rainbow sparkles at my feet. Snow crystals dazzle the eyes in the bright sunlight.
Together, we turn away from this view to drop into a pocket paradise to our north. Seamus and I have taken to calling this place, the oasis. As the glaciers retreated, a shard of ice remained, carving out a cold acidic bog. Slowly, at glacial speed, it has filled in, first with sphagnum, followed by black spruce and now cedar. Among the cedar, there is one very tall white pine.

When I think about the plunder of the many white pine that populated the Great Lake regions a hundred or so years ago I can't help but consider the leviathan and their similar fate. Great blue and sperm whales, and the great white and red pines were each magnificent and widespread in their own realms. A 19th century way of thinking soon reduced both populations to a scattered few left to tell the tale. Call me Ishmael or call me Aldo Leopold but I cling to a scattering of what remains as the ecological ship founders. The genetic pool has been drained and the friendly giants have run aground, separated from their nearest mates by a cruel division of time and attitude.

Five pairs of snowshoes drop down into the boggy oasis of Wabos North to seek the sage advice of Pinus Strobus. A stunning greenery awaits us among the dormant hardwoods counterpointing the predominant colour of winter. Cedars of all diameters tilt and weave in the spongy moss. One cedar in particular has a daunting task, as it lends supports to the sole surviving pine. Without this extra effort, the curving lean of this sun loving giant might have long ago been its downfall. The two species are anchored here together in a curious coupling. In cameo at least, cooperation has trumped competition.


While the two boys eat their lunch, we three take turns interviewing each other in front of the pine-cedar juxtaposition. It is a tradition Seamus and I began here at this site some years ago, providing dramatic perspective for our projects, http://www.lowcarbonhomes.info/ and http://www.skybearchalets.com/ We bask in the power of this place, and let the words channel out.
Ted speaks about his love of the ancient bur oaks of Illinois and Wisconsin. The openings of these prairie breakers resisted fire in much in the same way as this old pine has done. Ted puts his hands on the thick folds of bark that has ensured the tree's health and longevity.
Seamus refers to the dominance of nature in our lives. Here, that unwavering truth is self evident, but the same is true in other less obvious settings. In his words, “You don't have to look any further than your own back yard or to a single tree surrounded by concrete to see the same compelling principles demonstrated”.
It has been often repeated, although without a clear understanding, that we can't see the forest because of the trees. Perhaps we should look more closely at the spaces in between the trees, because therein stirs the magic. If we leave our preconceptions behind, we may notice a connectivity unimagined before. This unlikely oasis is linked to all other refugeum across this blue and green planet. Lands and oceans. Trees and whales.

As the shadows lengthened, we retraced our steps back down the mountain. The coyote has moved on, but the tracks remain, as do ours. When the snows return tomorrow, the mountain map will be redrawn.

By Jeffrey Riordan Hinich
posted by Jeffrey via Leslie
Posted by leslie anne at 10:09 No comments:

shephards may have had some opportunity for musing, hence
the pastoral eclogue that has evolved across the hills of time.
the flipping of the coin, perhaps apocryphal, surely iconic--fate & chance a blur, as the two sides tumble...we see it briefly as an orb in orbit around us---before it lands then rolls disappearing under a rock.

nicolas hinic (1885-1970)
my grandfather,
was a shephard in the mountains of croatia
near the plitvice lakes.
an early eclogue with his brother
around the turn of that century
may have gone something like this.
"one flip of this faded copper coin will
determine which one of us will go to the new world,
which one of us will stay behind
to watch over the flocks by day...okay then
best of three"
there were no winners or losers that day
the eclogue would continue, though the routes divide.
one will over look the limestone blue waters of
the plitvice karst, the other brother
join the logging camps of the northern great lakes
and there become politicized by the wobblies & later Eugene Debs.

nomadic & unconventional
they speak and move as one
and as many

by Jeffrey Riordan Hinich
Posted by leslie anne at 13:35 1 comment: